You are here: Home1 / CASE STORIES2 / You never dose alone! 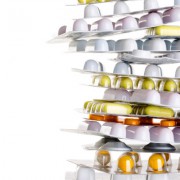 In todays treatment practice drugs are almost always given in combination or concomitantly together with other drugs. Knowing the Drug-Drug-Interaction (DDI) potential of a new molecule early, can have an important impact on the entire development strategy.

The biotech company in this case had initiated a number of in vitro experiments in order to understand how the drug molecule interacts with the cytochrome P450 system, the major drug metabolising enzymes in the liver. The team needed some help to interpret the data and asked us to evaluate the clinical relevance of the findings.

We found that the molecule showed a strong time dependent inhibition of the most important cytochrome P450 isoform CYP3A4. As the CYP3A4 enzyme was also the main metabolizing enzyme for the molecule itself, it can be expected that the drug will inhibit its own metabolism leading to accumulation of the compound. At the same time it will cause DDIs with numerous compounds that are also metabolized via this enzyme. In order to quantify the extend of interaction and to provide dosing recommendations in the prescribing information,  various clinical DDI studies would need to be conducted, which would have been particularly difficult in this case as the toxicity profile of the molecule prevented the conduct of studies in healthy volunteers.

Even though this assessment resulted in a rather negative message, it was important for the company to realize this issue early before major investments are done. The team is now considering to either test the drug in an alternative indication that is less critical with respect to DDI or switch the program to a back-up molecule with a different profile.

What is going on?
Scroll to top