You are here: Home1 / CASE STORIES2 / Aiming for the target! 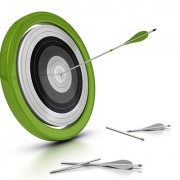 The molecule in this case is a powerful drug that showed very promising efficacy when administered directly into the target tissue.

However, in order to become a break through medicine with a huge market potential, the drug would need to be effective when given systemically either as tablet/capsule or after an iv infusion. We therefore conducted a thorough data review and estimated the dose necessary to achieve sufficient concentrations at the site of action.

The team had conducted a series of animal models of efficacy from which we derived some insights into the concentration/effect relationship on the cellular and tissue level. We also had pharmacokinetic information from a number of animal species and were able to extrapolate the exposures to humans. However, the weak part in our understanding of the process was the lack of a clear relationship between the plasma concentrations and the tissue levels. Without this information the uncertainty of the dose prediction would have been too vague and therefore additional experiments were initiated to fully understand the mechanism of biodistribution of the molecule.

Even though these additional experiments took some time and resources, the investment was fully justified as only with the additional data we reached a clear Go/NoGo decision for the further development of this molecule after systemic administration.

How to spot a flip flop?
Scroll to top