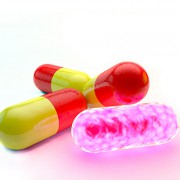 Drugs are expected to follow a certain dose response, meaning when we take a higher dose, we also observe higher concentrations in the body and consequently higher effects and may be side effects. Of course it can happen that from a certain dose onwards no further increases are observed as some biological processes may reach their limits.

We were therefore very surprised, when we reviewed the data of a small chemical molecule that showed a very unusual pattern. First of all, the half-life of the compound was close to 2 weeks, which is very long for a small molecule. After a single dose administration, the compound followed a regular dose response, but after multiple doses it seemed that no matter what dose was given the plasma concentrations always flattened out at the same level. We applied a computer model and tested various what-if scenarios, but none of the usual absorption, distribution and elimination processes was in line with this phenomenon. We had a suspicion that may be binding to plasma components could play a role and initiated respective experiments. It turned out that the molecule had an extremely strong binding to alfa-acid glycoprotein and that the plasma concentrations in the individual patients was a one-to-one reflection of their individual alfa-acid glycoprotein levels. With every dose that the patient took, the protein was loaded and the molecules kept in plasma. Only when the patient’s protein capacity was exhausted, the free molecules were excreted and further increases in dose had no additional effect.

Knowing the cause for this uncommon behaviour, was critical to determine the best dose and dose response in the further development strategy and allowed a smooth regulatory drug approval process.